Chiachio & Giannone are Leo Chiachio and Daniel Giannone, a duet of sophisticated and atypical Argentinian artists. Their textile art pieces are well known worldwide, and have been exhibited in numerous galleries, biennales and museums – soon to be open at MOLAA Los Angeles, through the Cultural Center Kirchner. Featured in many international publications, such as: Museum of Art and Design’s 2014, Survey of contemporary Latin American art, New Territories: Laboratories for Design, Craft and Art in Latin America, etc.

In 2013, their work “La famille dans la joyeuses verdure” was selected to be woven by Aubusson weavers, as part of a revival project at the Royal Aubusson tapestry fabric in France.

Their iconography has an atmosphere of Baroque’s subtlety and popular aesthetics, at once anchored in ancestral and domestic images, with techniques taken from various peoples of the world, servicing the fine fabrics, embroideries, prints, and textile mosaics of Chiachio & Giannone. Amazing contemporaries telling about their lives and society, as artists using brave insight, creativity and boldness to challenge the status quo and turning the world into a better place to live.

Their work resembles a crosspoint, between kitsch and glittery imagery. Chiachio&Giannone’s work include techniques, and materials from Latin American, European, and Asian cultures, all prominent reminders of Argentina’s history and present as a postcolonial multicultural society, challenging at the same time the typical perceptions of embroidery art and making use of the medium as a creative tool in order to communicate a social message with new and recycled materials.

Ever since meeting in 2003, Leo and Daniel have found in the other an original half, both as a couple (private life) and art working partners, unfolding into a rather unique creative unity.

The world of Leo Chiachio and Daniel Giannone is very special, and the description would not be complete without ignoring the fact that a third member to this couple already exists: Piolin, the dog – featured in a lot of their work, is part of the game as a mascot present everywhere on the canvases. Piolin is a Dachshund puppy.

Altogether, a family and an absolute fantasy well anchored into a day to day nourishing reality as a powerful communion.

Their work has an exuberant and exotic richness, with a profusion of colours and complex compositions through a multicolored palette, using cotton, silk, and woolly threads, contrasting severely with the rough simplicity of the support used – modest pieces of cotton, gathered from flea markets around the world, recovered and reinvented. Sometimes, as recipients of legacies brought by people who simply admire their work and eager to share their memories allowing a time travel through intervention of old embroideries and images deforming, transforming, subverting the object and breaking schemes.

Embroidery has existed throughout time, dating back as far as 5th BC. Despite that, this craft has been energized by visionary artists pushing the boundaries meaning and limits, like Leo Chiachio and Daniel Giannone.

The diversity of textures, and palettes to which tassels, fabric applications, incrustations, and stitching are incorporated stands out. Attention to extreme detail never gets lost.

Obsessive as they are, their embroidery is done every afternoon, Monday to Sunday – 9 hours a day, both bended over the same piece of cloth while listening to the radio, fully immersed into an intimate world somehow South American popular culture, with a strong kitsch flavor and a touch of Baroque.

Chiachio & Giannone live and work together in Buenos Aires. Painters with solid academic training, moving after they met and fell for each other, into embroidery.

A glimpse of light made them realize an instant commitment to each other and to a way of living where creativity is the catalytic force propelling further exploration using cotton threads, hand print serigraphic fabric, wool, rayon, to provide an almost jewelry effect used to enhance a vibrant spectrum of colours as their fantasies come alive with total freedom. Layering is the process mostly used, making it difficult for the eye to find out where one stops and the next begins.

Early enough in the relationship they acknowledged a commitment to promote that very act of empowering and arousing of emotions that led them to explore with creative empathy the work of many artists, seeking anything that allowed them to think about how culture comes together from all sorts of sources. Being clear about the chosen medium helped them better find a unique style.

That incentive has never prevented them to do good with needlework. The simple everyday experiences became a doorway to new challenging thoughts.

They produce breathtakingly gorgeous works of handmade embroidery art, blurring the line between illustration-embroidery, meticulously filling the space with thread. Somehow a canvas of happy fantasies found without hierarchy of genres and randomly chosen subjects.

Always on the lookout, observing the world around them, even if that plunged them into contradiction and paradox. Trial, error and taking action has been the chosen tool.

Needless to say, apart from watching each other work, sources like films, music, pop culture and art are always there provoking that sense of elevation that creativity is about.

It is not only about the great figures associated with textile, but also a tribute to the anonymous seamstresses, and embroiderers resisting the technification of life.

A question that still has been constantly addressed to both and the world around, refers to the blurring of limits between two people creating work through joint creation giving birth to only one emerging from the encounter. Happiness lies in achievement and joy of the creative effort turning their beliefs into art pieces.

Observing human ingenuity has been the most inspiring thing in action and a realization that labelling is a way of preserving ignorance and stigmatization of the unknown. Art as a way to make statements on things relevant to themselves and the world around, simultaneously reflecting changes in society with a strong academic knowledge of textile and visual arts.

Art stands as a chosen way to trigger and engage political discourse, through a visual element rather than words when dealing with issues of social justice, particularly when referring to the stigmatization of women, new family models, and gay issues. Aiming to challenge preconceptions and grab people’s attention so as to leave an indelible impression with results aiming to be profound and transformative. Rewriting history without a pen, no question about it.

A sense of the sublime is used to test propositions with total freedom. All kind of fantasies are possible, and nothing is forbidden. Their work incorporates elements of magical realism and a sense of humour when the traditional family portrait turns into a riot of colour, reflecting the changes in society from a strong academic knowledge of textile and visual arts.

Born in Argentina. Fortunate enough to be a fish of nowhere. Trained and lived in London, Los Angeles, Rio de Janeiro, and Belgium.

Started my career in the film business and journalism in the 80’s. I witnessed the big changes into digital. Shifting to my big passion, the visual arts in 2000.

Currently based in Latin America, surrounded by many talented artists. I believe my cross-cultural perception highlights the very best of all worlds 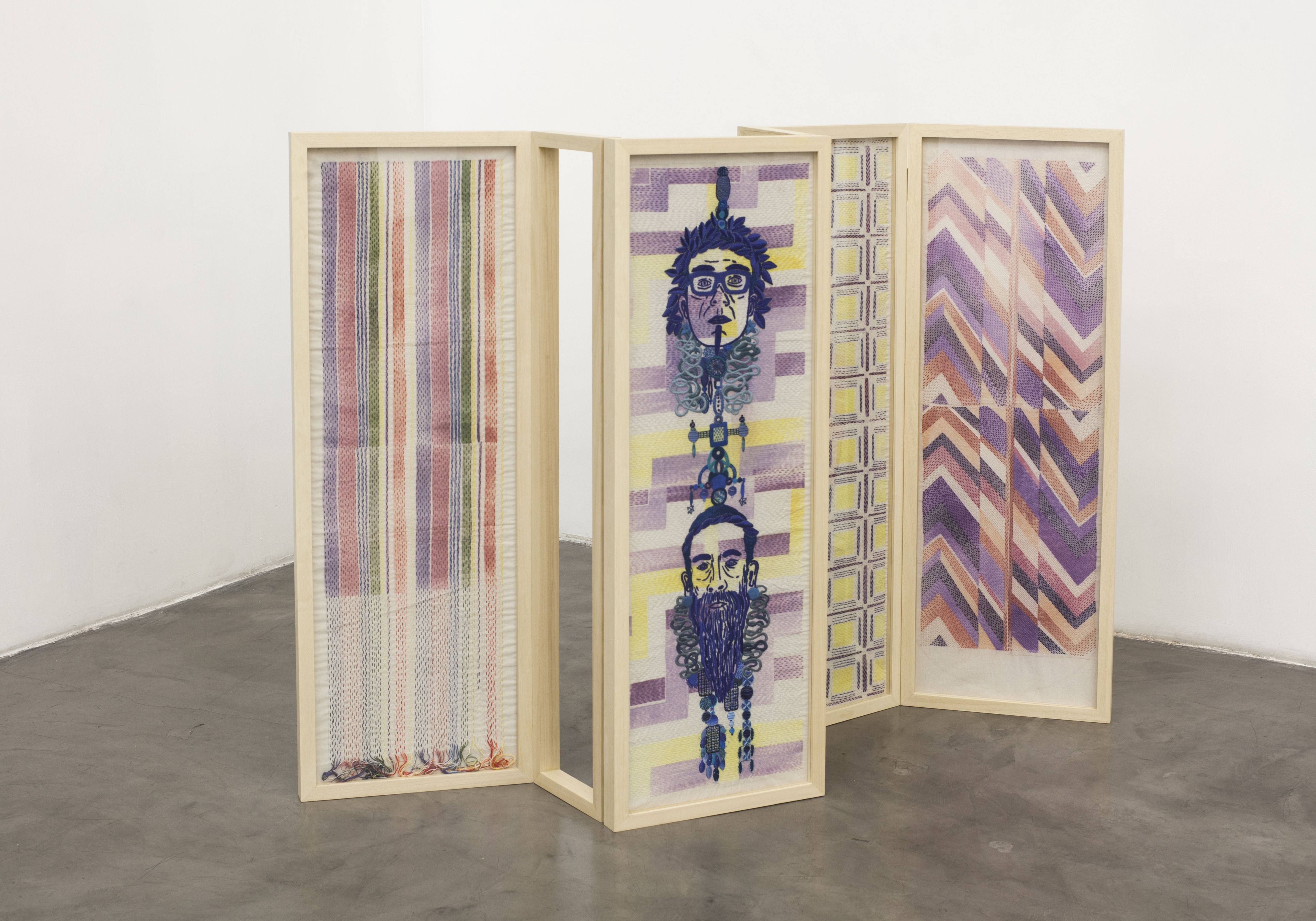 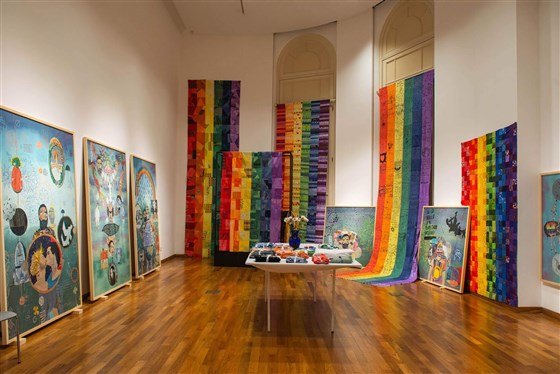